A life threatening problem in which the lungs are severely injured. Inflammation (swelling) occurs throughout the lungs. In the lung tissue, tiny blood vessels leak fluid and the air sacs (alveoli) collapse or fill with fluid. This fluid buildup keeps the lungs from working well. Persons with this problem will have trouble getting enough oxygen (O2) into the body, removing carbon dioxide (CO2) from the body, and become short of breath. Persons with ARDS must be given extra oxygen and will usually need the help of a mechanical ventilator (respirator) to breathe.

A common long term inflammatory disease of the airways of the lungs.  It is characterized by variable and recurring symptoms, reversible airflow obstruction, and bronchospasm. Symptoms include episodes of wheezing, coughing, chest tightness, and shortness of breath.  These episodes may occur a few times a day or a few times per week. Depending on the person they may become worse at night or with exercise.

[alve´oli] Alveoli are any of the tiny air filled sacs arranged in clusters (alveolus) in the lungs that allow oxygen to diffuse into the bloodstream and carbon dioxide to diffuse out of it.  Also called air sac. 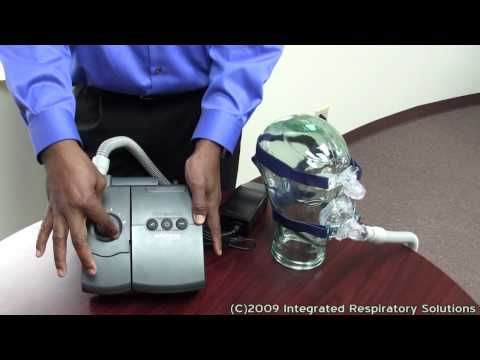 “BiPAP” is a term that is sometimes used colloquially to refer to bilevel positive airway pressure (BPAP). A BiPAP machine, also known as a BPAP machine, is a breathing apparatus that helps its user get more air into his or her lungs.

[brong’-kee, -kahy] The main passageway into the lungs. When someone takes a breath through their nose or mouth, the air travels into the larynx. The next step is through the trachea, which carries the air to the left and right bronchus. The bronchi become smaller the closer they get to the lung tissue and are then considered bronchioles. These passageways then evolve into tiny air sacs called alveoli, which is the site of oxygen and carbon dioxide exchange in the respiratory system.

[brong-ke-EK-ta-sis] An abnormal, chronic enlargement of the bronchi, the passageways from the trachea to the alveoli that are the air-exchanging parts of the lungs. Bronchiectasis generally occurs as a result of infection, although noninfectious factors may contribute to the development of this condition.

A preventable and treatable disease that makes it difficult to empty air out of the lungs. This difficulty (airflow obstruction) can lead to shortness of breath or feeling tired because you are working harder to breathe. COPD is a term that is used to include chronic bronchitis, emphysema, or a combination of both conditions. Asthma is also a disease where it is difficult to empty the air out of the lungs, but asthma is not included in the definition of COPD. It is not uncommon, however for a patient with COPD to also have some degree of asthma. 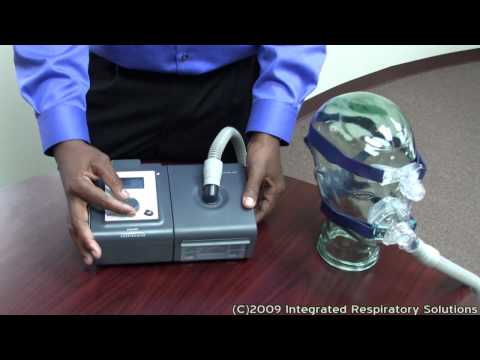 CPAP is being used by millions of people in the US every night. It is delivered using a mask that covers the nose (or sometimes both the nose and mouth). A CPAP machine works by blowing air into the nose and throat. This blowing of air causes a positive pressure to hold the upper airway (back of the throat) open during sleep. When the upper airway is open, airflow can pass to the lungs undisturbed. A person using CPAP will sleep more soundly without snoring or arousals.

[kän-trə-ˌin-də-ˈkā-shən] A symptom or condition that is a medical reason for not doing or using something (such as a treatment, procedure, or activity).

When air passes out through our voice box with force, a sound is made that we all recognize as a “cough.” The act of coughing usually begins with a deep breath in, followed by air leaving the mouth with force. A cough is your body’s way of preventing material from entering your breathing tubes (airways) and clearing mucus or foreign material from your airways.

The most common, life-shortening genetic disease in Caucasians. It affects the transport of salt and water across cells and affects different organs, but lung disease is responsible for the majority of symptoms, burden of care, and lost years of life.

Deconditioning is the loss of muscle tone and endurance due to chronic disease, immobility, or loss of function.

[disp-ne´ah] Breathlessness or shortness of breath; labored or difficult breathing. It is a sign of a variety of disorders and is primarily an indication of inadequate ventilation or of insufficient amounts of oxygen in the circulating blood.

[emfa’·si:ma] A condition that involves damage to the walls of the air sacs (alveoli) of the lung. Normally there are more than 300 million alveoli in the lung. The alveoli are normally stretchy and springy, like little balloons. Like a balloon, it takes effort to blow up normal alveoli; however, it takes no energy to empty the alveoli because they spring back to their original size. In emphysema, the walls of some of the alveoli have been damaged. When this happens, the alveoli lose their stretchiness and trap air.

[eg-zas″er-ba´shun] Exacerbation is a worsening, an increase in the severity of a disease, or its signs and symptoms. For example, an exacerbation of asthma might occur as a serious effect of air pollution, leading to shortness of breath.

Used in pre and post lung transplants as a bridging technique to provide oxygen to the blood until end stage lungs can be replaced and/or used until transplanted lung function on their own.

FEV measures how much air a person can exhale during a forced breath. The amount of air exhaled may be measured during the first (FEV1), second (FEV2), and/or third (FEV3) second(s) of the forced breath.

Hydraulic equipment has some great advantages for strength training. First, what are the main differences between hydraulic and free weight systems? Hydraulic systems use oil filled cylinders (much like the shock absorbers in a car) to provide the resistance in your training. Free weights use the weights themselves as the resistance. While it is possible to over lift with free or stacked weights, a hydraulic system will never cause an injury from too heavy a weight.

Hydraulic systems are not going to suit everybody. Likewise free or stacked weights are not for everybody either. The Asthma and Lung Center has both systems.  The choice of strength training equipment will be decided by our staff after your evaluation and during the progression in your individual program. 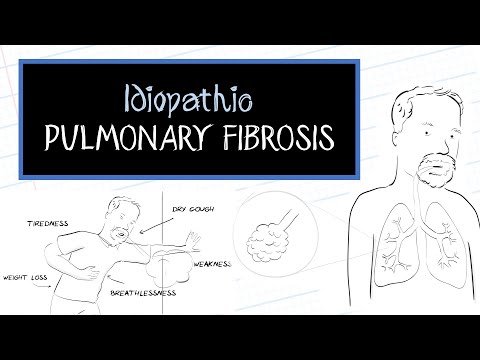 Pulmonary fibrosis [PULL-mun-ary fi-BRO-sis] is a disease in which tissue deep in your lungs becomes thick and stiff, or scarred, over time. The formation of scar tissue is called fibrosis. Sometimes doctors can find out what’s causing fibrosis, but in most cases, they can’t find a cause. They call these cases idiopathic (id-ee-o-PATH-ick) pulmonary fibrosis (IPF).

As the lung tissue thickens, your lungs can’t properly move oxygen into your bloodstream. As a result, your brain and other organs don’t get the oxygen they need. (For more information, go to the “How the Lungs Work” section of this glossary.) 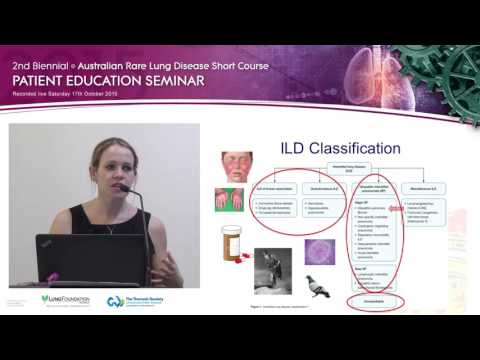 A term that broadly describes a diverse collection of more than 200 lung disorders. These diseases are classified together because they all affect the tissue and space around the alveoli (air sacs), called the interstitium.

The larynx is a tough, flexible segment of the respiratory tract connecting the pharynx to the trachea in the neck. It plays a vital role in the respiratory tract by allowing air to pass through it while keeping food and drink from blocking the airway. The larynx is also the body’s “voice box” as it contains the vocal folds that produce the sounds of speech and singing.

Liquid oxygen is made by super-cooling (-300 degrees) oxygen. In liquid form, oxygen takes up less space, so a large amount can be stored in the home in thermos-like storage canisters. Liquid systems deliver 100% oxygen and do not require electricity.

A demyelinating disease in which the myelin sheaths (insulating covers) of nerve cells in the brain and spinal cord are damaged. This damage disrupts the ability of parts of the nervous system to communicate, resulting in a range of signs and symptoms, including both physical and mental disabilities. Specific symptoms can include double vision, blindness in one eye, muscle weakness, trouble with sensation, or trouble with coordination.

A nasal cannula is a two-pronged tube that is placed in your nose for delivering oxygen. The other end of the tube is attached to your oxygen system.

A nebulizer (or nebuliser) is a drug delivery device used to administer medication in the form of a mist inhaled into the lungs.

An oxygen concentrator is a device that takes in the oxygen we normally breathe (that consists of 21% oxygen), removes other gases from the air, and delivers 85-95% pure oxygen to our tissues and organs.

Oxygen is compressed under high pressure into a metal cylinder and is stored in either large or small cylinders. This is the oldest method for storing oxygen. Cylinders contain 100% oxygen.

Oxygen saturation is a term referring to the fraction of oxygen-saturated hemoglobin relative to total hemoglobin (unsaturated + saturated) in the blood.  Healthy level is 90% to 92% or higher and is usually estimated with a pulse oximeter clipped painlessly to the finger.

A progressive disorder of the nervous system that affects movement. It develops gradually, sometimes starting with a barely noticeable tremor in just one hand. But while a tremor may be the most well-known sign of Parkinson’s disease, the disorder also commonly causes stiffness or slowing of movement.

The throat (pharynx) is a muscular, cone-shaped tube that runs from the back of your nose down into your neck. It contains three sections: the nasopharynx, oropharynx, and laryngopharynx (aka hypopharynx).

Relating to the lungs 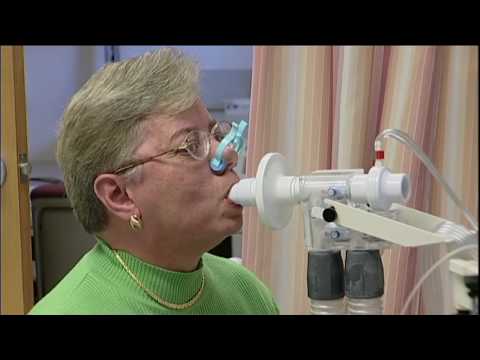 Pulmonary fibrosis describes a group of lung diseases in which thickening of the walls of the alveoli, caused by scarring, can result in cough, shortness of breath, fatigue, and low blood oxygen levels. Pulmonary fibrosis can be caused by an identifiable irritation to the lungs, but in many cases the cause is unknown. In cases when the cause of PF is unknown, the diagnosis is idiopathic pulmonary fibrosis (IPF). Idiopathic means there is no known cause at this time.

A pulse oxygen delivery device delivers oxygen only when you breathe in. As you breathe in, the device senses the start of your inhalation and immediately gives a short “pulse” of oxygen.

A disease involving abnormal collections of inflammatory cells that form lumps known as granulomas. The disease usually begins in the lungs, skin, or lymph nodes.

A test that measures the amount of air a person’s lungs can move in and out and at what rate.

The trachea is a wide, hollow tube that connects the larynx (or voice box) to the bronchi of the lungs. It is an integral part of the body’s airway and has the vital function of providing air flow to and from the lungs for respiration.